They say one of the most helpful ways to learn Korean is through variety shows. It's definitely true. I've been watching variety shows ever since I started to like Kpop and Korean movies. The first variety show I've ever watched I think was EHB(Exploration of the Human Body). I watched it because Super Junior starred in it. It was hosted by Shin Dong Yup. I really enjoyed that show and until now, when I watch it again, I still laugh a lot. I think Korea has the best variety shows. Another show that I really love is Star King hosted by Kang Ho Dong, one of the funniest korean guys I've ever known. Just by his face, you can really laugh and tell he's a great comedian. haha! Star King I think is quite famous since a lot of international performers guested there. Many people(especially Filipinos) know Star King because of Charice Pempengco. She guested there, and her guesting was featured on Philippine TV, and in Youtube. I think a lot of people discovered Super Junior because of that guesting too.

In Korea, when singers release their albums or singles, they promote it on weekend music shows and they guest in a lot of variety shows. Star King, I must say, is definitely a stepping stone for singers who wants to try the comedy and hosting world too. A lot of potential comedians and MCs/hosts were discovered there.

Super Junior's members (especially, Leeteuk and Eunhyuk) are regulars of variety shows too that's another reason why I love watching variety shows.

Strong Heart is a new variety show in SBS. 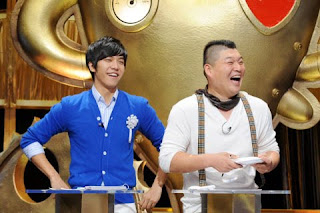 It is hosted by Kang Ho Dong and Lee Seung Ki. This is Lee Seung Ki's debut show as an MC. He's a famous actor and singer. I found out about him on Shining Inheritance I think.. But for a starter I think he's really doing well. This new variety show will have 23(24? i'm not sure.) guests who will have talk battles about their stories(true stories that really happened to them) to share and then the one who has the best story for the audience will be the winner or the Strong Heart of the day. I'm still on episode 2 of the show and so far it's favorite episode. The stories of Sandara, Brian (of Fly to the Sky), and Lee Eui Jung was really touching.

I really enjoy watching this show and I'm looking forward to more subbed videos. ahahaha! Because I can only understand very little Korean.. and sometimes they tend to talk so fast I can't catch up.. ㅋㅋㅋ

Anyway, you can watch Strong Heart (with English subtitles) in strongheartsubs' Youtube channel. There are also many subbed clips in YT but so far, SHS are the only team I know who are subbing the whole episodes. Enjoy! ^___^